Checked Out for Murder (The Haunted Library Mysteries #4) by Allison Brook, Marilyn Levinson 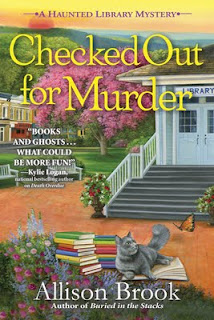 Checked Out for Murder
(The Haunted Library Mysteries #4)
by Allison Brook, Marilyn Levinson

Daphne Marriott strolls into Clover Ridge and informs librarian Carrie Singleton that she's a psychic. But had she foreseen what fate awaited her, Daphne would have steered clear of the quaint Connecticut town. Evelyn, the library ghost, tells Carrie that there's more to Daphne than she lets on.

The mysterious woman grew up in Clover Ridge with her no-good dad, who apparently met his end at the hands of Daphne's brother, Billy. Still, Daphne proves a welcome distraction when Carrie's overbearing mother hits town. Mom's much younger husband, Tom, is in a movie that's lensing locally, and she's there to keep an eye on him: Tom's costar, sultry Ilana Reingold, is also his ex-fiancée, and there's no denying the chemistry is still there. Soon after mingling with the moviemakers at a meet-and-greet, Daphne is found dead.

Carrie and Evelyn investigate, assisted by bushy-tailed library cat Smoky Joe. But the suspect list could overflow the library shelves. Has Billy killed another relative? Is their long-missing mother involved? Or Daphne's mean ex-husband? Carrie's sure she knows who committed the crime, but can she bind together the clues before the culprit Dewey-decimates the town?

This is the fourth book in the Haunted Library mysteries series by Allison Brook, Marilyn Levinson.

While Carrie’s mother and her much younger new husband are in town filming a movie, a stranger who has a history in the town is found dead. She had given a class on how to use their psychic abilities that she put on at the Library where Carrie works. Somehow all the stars of the movie have become suspects in this woman’s death and the story is off to the races.

I have to admit this was a bit of a convoluted plot with a lot (I mean a lot) going on. Then as a sidebar Carrie’s mom and her husband split up and Carrie is forced to have her mother live with her for awhile. This is something she never would have done in the past. Even Carrie’s father gets into the act and comes to town to support his ex-wife.

Even with so much going on, this story is really entertaining and easy to follow. I liked a lot of the movie cast and how they were portrayed. Definitely a good book to read if you need to distract yourself. You will have to put all your focus on this when reading it. Loving this series so far.

I received this as an ARC (Advanced Reader Copy) in return for an honest review. I thank NetGalley, the publisher and the author for allowing me to read this title.
Posted by Toni at 9:10 AM