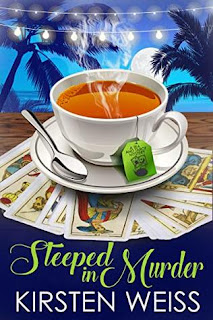 Abigail Beanblossom’s dream of owning a tea room in her California beach town is about to come true. She’s got the lease, the start-up funds, and the recipes. But Abigail's out of a tearoom and into hot water when the realtor turns out to be a conman… and then turns up dead.

But not even death puts an end to the conman’s mischief. He rented the same space to a tarot reader, Hyperion Night. Convinced his tarot room is in the cards, Night’s not letting go of the building without a fight. Steamed, Abigail realizes the only way to salvage her tea room is to join forces with the tarot reader, even if he isn’t her cup of tea.

But they must work together, steeping themselves in the murky waters of the sham realtor's double dealings, in order to unearth the truth – before murder boils over again.
Steeped in Murder is the first book in the Tea and Tarot cozy mystery series. Buy the book to start this hilarious caper today.

This is the first book in the Tea and Tarot Cozy mystery series by Kirsten Weiss.

Wow! How fun was this story? I have to admit that the story did give it a lot of stress vibes due to the loss of money for the main characters. So, if you are triggered by money issues, you might want to be aware of this fact ahead of time.

Abigail puts 6 months rent down on the building of her dreams and then realizes that the real estate agent has also taken three months rent from Hyperion Night. They have been scammed! When Abigail tries to call the agent to put a stop on her check, she hears his phone ring nearby. Then she finds the man’s body out back of the building she wanted to purchase. He’s dead!

Between her neighbor who is remodeling his house, the crazy tarot reader who wants her tearoom space and the stress of the fact that her hard earned money is gone, this debacle is putting her down for the count. Also, did I mention that she has a grandfather from whom she borrowed some of this money and she is wanting to pay him back for his generous donation to her dream.

So, obviously, Abigail and Hyperion decide to uncover the the killer and recover their money. This was fun to follow and the character base was on point. I loved the tea room and tarot concept and am kinda surprised Abby relented and accepted the co-ownership with Hyperion considering how her new-agey parents left her at the airport as a child and called her grandparents to come and get her. How heartbreaking is that!?

I enjoyed the tarot aspect of the story. It was fun and yet it didn’t overwhelm the storyline too much. This is a series well worth your while. Loving it so much!

If you want book two, go to the author’s website and join her newsletter. You can get a mobi file, pdf or epub of the book two novella.

If you like cozy mysteries, definitely check this one out. You won’t be disappointed.
Posted by Toni at 1:03 PM