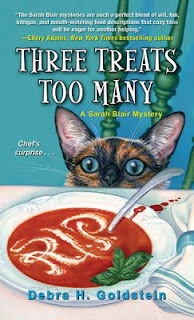 Goodreads synopsis:
When a romantic rival opens a competing restaurant in small-town Wheaton, Alabama, Sarah Blair discovers murder is the specialty of the house . . .

For someone whose greatest culinary skill is ordering takeout, Sarah never expected to be co-owner of a restaurant. Even her Siamese cat, RahRah, seems to be looking at her differently. But while Sarah and her twin sister, Chef Emily, are tangled up in red tape waiting for the building inspector to get around to them, an attention-stealing new establishment--run by none other than Sarah's late ex-husband's mistress, Jane--is having its grand opening across the street.

Jane's new sous chef, Riley Miller, is the talk of Wheaton with her delicious vegan specialties. When Riley is found dead outside the restaurant with Sarah's friend, Jacob, kneeling over her, the former line cook--whose infatuation with Riley was no secret--becomes the prime suspect. Now Sarah must turn up the heat on the real culprit, who has no reservations about committing cold-blooded murder . . .

This is the third book in the Sarah Blair mystery series by Debra H. Goldstein.

While Sarah and her sister are waiting for their new restaurant to be inspected, her late ex—husband’s mistress is already having a grand opening for her own restaurant. Lots of rivalry between these two as Jane even tries to steal one of Sarah’s employees after her popular vegan sous chef is found dead outside their establishment.

Sarah’s life is pretty full in this book. There is a whole secondary storyline featuring her two animals RahRah the cat and Fluffy the dog and the veteran run vet clinic.

Riley Miller, the late sous chef is also a pretty visible character even in death. She was a big fan of motor bikes and  made it her mission to ride with others who owned a bike every weekend. She dated and dumped quite a few guys in her young life and so the suspect pool was pretty large, to say the least.

This one was a hard one to figure out but I enjoyed the chase as Sarah stuck her nose into the investigation. Lots of great characters here and a rich community that just jumps off the page. Loving this new to me series. Definitely one I want to continue on with.

I received this as an ARC (Advanced Reader Copy) in return for an honest review. I thank NetGalley, the publisher and the author for allowing me to read this title.
Posted by Toni at 9:52 AM