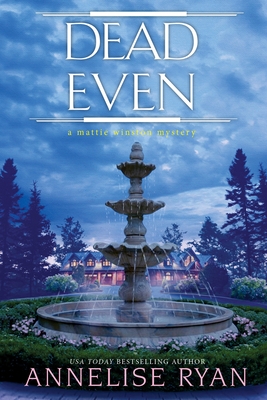 In Sorenson, Wisconsin, a local bigshot is found with a pool cue through the heart—and Mattie Winston must untangle a web of lies to sink a killer . . .

In her previous career as a nurse, Mattie Winston’s job was to keep death at bay. Now, as a medicolegal investigator, she’s required to study death intimately—to figure out causes and timing, and help deduce whether it was natural or suspicious.

In the case of Montgomery “Monty” Dixon, a well-to-do Realtor, there can be little doubt: Broken pool cues do not embed themselves. Monty’s body is found in the game room of his lavish house, the walls adorned with photos of Monty and various celebrities. But as Mattie and husband Steve Hurley, a homicide detective, both know, money and connections can’t protect anyone from a killer.

The first suspect is Monty’s wife, Summer, who claims to have been at a cooking class at the time. When that alibi is served up as a fake, Summer moves to the top of the suspects list, but is soon joined by Monty’s ne’er-do-well son, Sawyer, who has racked up gambling debts he hoped his dad would pay off. Monty’s twin brother is engaging in shady financial deals. An affair, a Ponzi scheme, a disputed inheritance . . . there are as many motives as suspects, and soon Mattie and Hurley have turned up other, possibly related deaths.

Balancing a high-profile case with the demands of their increasingly stressful household isn’t easy. It’ll take all of Mattie’s skill—along with a lucky break or two—to stop a killer from racking up another victim.

This is the twelfth book in the Mattie Winston series by Annelise Ryan.

This story was really interesting. Mattie has quite an interesting career as a medical investigator of the dead after having been a nurse for many years. Her husband, Steve, is a homicide detective with the police department. They have a couple of kids, a teenager and a toddler. I can’t imagine how they both make that work on a daily basis much less when a murder invades and puts more responsibility on their plate.

I think my favorite scene in the whole book is one that takes place in a grocery store where a woman standing in line ahead of her has too many items for the express lane. Talk about a karma moment right there. It is the little things like that which makes this book such a standout.

The whole mystery was just clever. There were so many facets beyond the normal mystery plotline that occurred here. It seemed so simple. A guy gets stabbed with a broken pool cue. Looked very open and shut just like a few other deaths that happened that same night that others handled. Then when Mattie gets involved, she gets to the nitty gritty uncovering the iceberg of everything hiding beneath the surface.

Such a good story. Just so much to love about this series  I can’t get enough.

The one draw back I see is that the cover doesn't do this book justice. I actually bought a paperback of book nine. I gave it away before I even read it due to the cover turning me off. Now I wish I had that book back. Coincidently, I bought a number of books on my kindle in this series right after finishing it.