Mystery at the Masquerade (Secrets and Scrabble #3) by Josh Lanyon 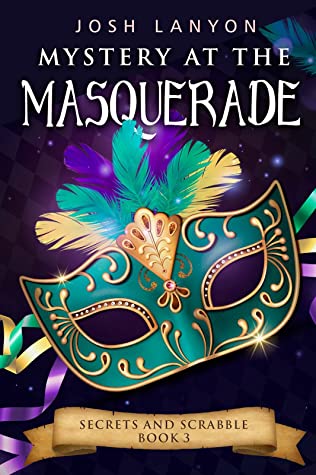 Mystery at the Masquerade

Love is in the Salt Sea Air--and So is Murder!

Ellery Page, aspiring screenwriter, reigning Scrabble champion, and occasionally clueless owner of the Crow’s Nest mystery bookshop, is both flattered and bemused when he’s invited to the annual Marauder’s Masquerade, the biggest social event of the season in the quaint seaside village of Pirate’s Cove, Rhode Island.

As his relationship with Police Chief Jack Carson seems to be dead in the water, Ellery is grateful for a little flattering male attention from the village’s most eligible bachelor. But any hopes of romance hit the shoals when Julian is accused of murdering his mother’s unlikable second husband during the spooky annual ghost hunt in the old cemetery.

This is the third book in the Secrets and Scrabble series by Josh Lanyon.

This was a great book. I loved the male protagonist since you don’t normally see that in cozy mysteries. He was a bit of a reluctant sleuth even though Jack accused him of delving into situations and getting himself in danger without thinking.

There have been a bunch of burglaries in the area and Ellery runs across the gang going home one night and gets chased into an ice house.

Then during a masquerade ball the body of an unlikeable gent is found in the cemetery during their ghost hunt. Talk about spooky.

This is a pretty short mystery, a little over 200 pages, but it really packs a punch. This is definitely a series I want to continue to follow.

If you aren’t aware, this has a M/M romance on and off all the way through the book. There is nothing inappropriate and it is basically just kissing.