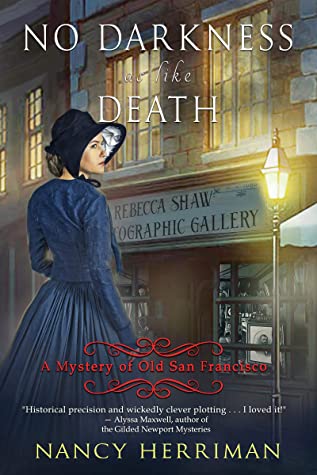 In a new Mystery of Old San Francisco, when a controversial politician is found dead of natural causes, Celia and Nick must prove that his death came about in a most unnatural way . . .

Few in San Francisco were troubled by the news that Ambrose Shaw had been found dead at a local health institute—the prominent banker had recently turned to politics and was reviled by many for his incendiary views. But when Celia Davies learns that his death is considered suspicious by the police and that a damning piece of evidence points to a patient of hers as the culprit, she feels compelled to prove the woman’s innocence.

Teaming up with Detective Nick Greaves, Celia soon discovers there’s no shortage of suspects, including the victim’s many political enemies, his disaffected stepson, who may have been too eager to receive his inheritance, and even the dead man’s fellow patients at the institute, whose founder promises miracle water cures but has been covering up numerous burglaries of his well-to-do clients.

As Celia and Nick struggle with their feelings for each other as well as the many murky aspects of the case, they’ll have to navigate an endless trail of false clues and dead ends to reach the cruel truth behind a perplexing murder . . .

This is the fourth book in the Mystery of Old San Francisco by Nancy Herriman.

This is the third book I have read in this series and I have to admit that it just keeps getting better and better. Celia Davis is a nurse who is very good at solving crimes. Detective Nick Greaves doesn’t keep Celia from her mysterious hunt but he uses her expertise to aid his own investigation. They make a very good team and round out each other nicely.

There has been a hit of interest in a romantic relationship between the two of them but I am not sure if such a thing will ever happen, especially considering the big shock to Celia at the end of this. That makes me a bit sad since I think the two of them together would be great.

The mystery here was quite complex and I like how Nick sometimes marvels at Celia’s insights. Lots of suspects to consider and with the hinderance of the setting of the 1860’s, I think the author does a great job of making us believe the time frame we are in.

This is a series I greatly recommend. This book really kept me guessing up until the end. I look forward to other books by this author.

If you love a good historical cozy mystery, definitely check this one out.