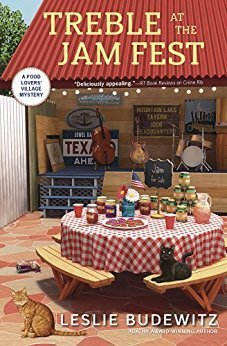 Treble at the Jam Fest

Erin Murphy, manager of Glacier Mercantile (aka the Merc), is tuning up for Jewel Bay’s annual Jazz Festival. Between keeping the Merc’s shelves stocked with Montana’s tastiest local fare and hosting the festival’s kick-off concert, Erin has her hands full.

Discord erupts when jazz guitarist Gerry Martin plummets to his death from the rocks above the Jewel River. The one-time international sensation had fallen out of sync with festival organizers, students, and performers. Was his death an accident―or did someone even the score?

Erin investigates despite the warning signs not to get involved. And when the killer attacks, she orchestrates her efforts into one last crescendo, hoping to avoid a deadly finale.

This is the fourth book in the Food Lovers’ Village mystery by Leslie Budewitz.

This series surrounds a community of music minded folks in a town called Jewel Bay. Erin Murphy is now in charge of the Glacier Mercantile also known as the Merc. When a jazz guitarist plummets to his death along one of the paths above the Jewel River, Erin knows they need to get a handle on things quickly. They don’t want to lose any of their tourist industry.

It was an interesting story and the plotline really keeps your attention. If you are into music, then this book is for you. I liked the main cast and look forward to checking into other books in this series for sure.