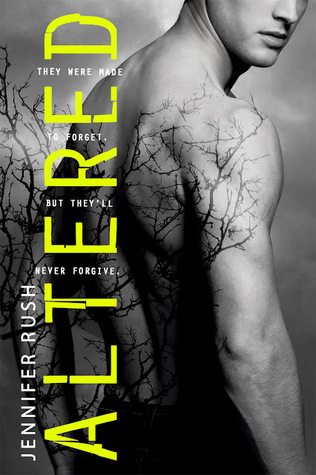 They were made to forget. But they'll never forgive.

Everything about Anna's life is a secret. Her father works for the Branch, at the helm of its latest project: monitoring and administering treatments to the four genetically altered boys in the lab below their farmhouse. There's Nick, solemn and brooding; Cas, light-hearted and playful; Trev, smart and caring; and Sam . . . who's stolen Anna's heart.

When the Branch decides it's time to take the boys, Sam stages an escape. Anna's father pushes her to go with them, making Sam promise to keep her away from the Branch, at all costs.

On the run, with her father's warning in her head, Anna begins to doubt everything she thought she knew about herself. She soon discovers that she and Sam are connected in more ways than either of them expected. And if they're both going to survive, they must piece together the clues of their past before the Branch catches up to them and steals it all away.

This is the first book in the Altered series by Jennifer Rush.

Wow. What an awesome book! Talk about plot twists. There are quite a few in here I didn’t see coming.

This starts out showing us Anna and her father. They seem like just a normal family. The mom had died when she was one so she never knew her. The dad has this unique job working for a company called The Branch where he keeps four teens, probably near 18, in the basement in cages. No bars, just plexiglass. He is like a scientist. He just monitors them with the help of Anna.

This is where you realize these four guys are like rats in cages. They are being monitored and given tests, blood test and such every day. Anna has befriended one guy whom she deems her “best friend,” named Trev. But she is fascinated by the enigma who is Sam.

I don’t want to give too much away since the unfolding of the story is the best part. This is a young adult novel but it is very readable and totally keeps your attention the entire way through. Definitely loving this universe Rush has created and have already bought the next novella, Betrayed and novel, Erased, in the series.

If you love science fiction, mystery, thriller, suspense books, definitely check this one out. You won’t be disappointed.