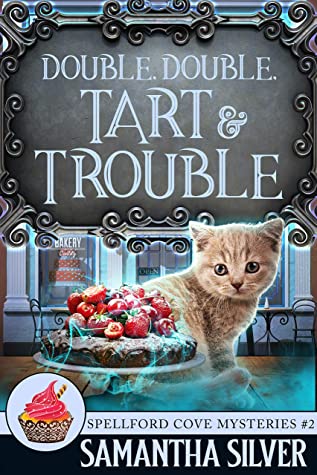 Welcome to Spellford Cove, where the baking is sweet and the witches are wild.

Just when Robin thought things were settling down a bit in Spellford Cove, she finds herself mired in a murder investigation once more when a customer of hers is poisoned. Then just to make matters worse, a photo of Queen of Tarts cheesecake in front of the body is printed on the front page of the local paper.

Robin soon realizes that once again she has no choice but to try and find the killer, this time to save her business. But with the main reporter in town deciding to tank Robin's bakery, and that strange woman making another reappearance, Robin feels like a woman juggling too many muffins.

Can she find the killer and save her business? Or has Robin baked her last batch of brownies?

This is the second book in the Spellford Cove series by Samantha Silver.

This story stars off with a bang. A gal comes into the Queen of Tarts bakery and wants a special sort of pumpkin cheesecake that Robin doesn’t have made for that particular day. The lady is very rude and eventually settles for a slice of Egg Nog cheesecake (doesn’t that sound good?). Not long later, this lady is found dead with Robin’s cheesecake half eaten and the Queen of Tarts bag lying on the ground next to her body. A pesky reporter takes a picture of the scene and the bag plus the cheesecake get into the photo. Now everyone thinks Robin’s cheesecake poisoned the lady.

This was a great story considering the limited amount of pages that the author used to describe everything. I wish it had been longer so I could have spent a bit longer in Spellford Cove.

Really enjoying the heck out of this series! Such a fun cozy romp into the mystery and magic of the Cove!

Loved so much about it. If you like magical cozy mysteries, definitely check this one out. You won’t be disappointed.