Hidden Dragon (The Treasure of Paragon #7) by Genevieve Jack 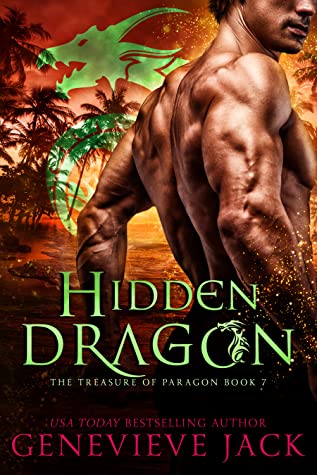 (The Treasure of Paragon #7)

No one ever promised forever would be easy.

Dianthe's second sight has always been both a blessing and a curse. She can't control her visions, yet they're unerringly accurate, until an erroneous prophecy results in the destruction of her homeland. The revelation crushes her spirit and endangers her role as an officer in the rebellion to take back the kingdom of Paragon.

Until their future was hidden.

Sylas, dragon shifter and exiled prince, is the leader of the rebellion, but he can no longer rely on his mate Dianthe's psychic powers. His inner dragon is secretly pleased to relegate her to the sidelines. Even if his decision temporarily drives her away, he'd rather have her angry than dead. Or worse.

No one ever promised forever would be easy.

When changing circumstances accelerate the rebellion's plans, Dianthe's fairy roots make her the only one who can perform a dangerous and necessary task. Her need to prove herself soon collides with Sylas's desire to protect her and strains their connection to the breaking point. Dragon mating bonds are eternal, but if Dianthe and Sylas don't find a way back to each other, not only will their marriage fail, their mission to reclaim Paragon will as well.

This is the seventh book in the Treasures of Paragon series by Genevieve Jack.

I have to admit that I was a little annoyed at Sylas for a majority of this book. Okay, I know Aborarella was not a nice fairy at all and had crossed them time and time again, but Sylas telling his wife that he didn’t believe in her visions when they had proved accurate every time just boiled my blood. I kind of hung onto that for a lot of the book and I realized that I would not have stayed and tried to work it out with him and make him see my side. Dianthe had the patience of a saint.

Again we bring in the Tanglewood sisters and they prove to be quite helpful when they need to look for Hera’s grimoire. I have a feeling when we finally get to the end of the book Hera is not going to give Eleanor what she wants and that fight will be epic. I was horrified the lengths Eleanor would go to keep Aborarella bound to her just so she could accomplish her aims.

The characters in this book are just so fully thought out and crafted that it is a a thing of art. Then add to that the fact that there are so many different personalities here and I am mind blown. I can’t image how long it took to create such a universe.

There is also like a hero’s journey in every book that is followed to the letter. I am just amazed and in awe each time I pick up one of these books. I think Genevieve Jack needs to give classes on world building and character creation. Wow, just wow in all aspects. I love the mythology brought into the real world aspect of this.

I received this ARC from the author in return for an honest review.