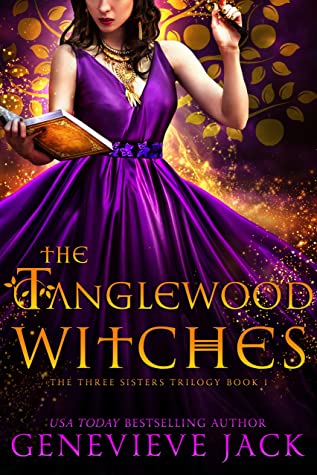 (part of the Treasures of Paragon series)

Every witch has a story that begins with the unexpected!

In this enemies-to-lovers romance, the last thing Alena expects is to be hauled out of bed by an Egyptian soldier and tossed into a stone cell. Then Orpheus steps from the shadows. The rake who once almost tricked her into his bed is suddenly her partner in a forced mission: to find a celestial weapon promised to Cleopatra.

Orpheus never expected to meet anyone like Alena, let alone to deceive her. Could their immediate connection be due to a common secret— ancestral magic? To survive this game of the gods, he’ll have to earn her trust again and heal old wounds before it’s too late.

The biggest surprise? Surviving their quest is just the beginning.

Growing up in the Garden of Hesperides, Medea has never wanted for anything. But she and her sisters Circe and Isis have quickly exceeded their parents' magical abilities, fueled by the power of the Tanglewood, a mysterious tree that sprouted the day they were born. Desperate to expand their mystical knowledge, together they conjure a golden grimoire, the most powerful magical text in existence.

Now, even paradise can't provide the one thing Medea wants most, privacy to practice her advanced magic. To get it, she'll break the rules... and come face to face with the handsome dragon who guards the gate.

The Tanglewood Witches is a duet of paranormal romance novellas and a prequel to the Treasure of Paragon Series, perfect for fans of witch and dragonshifter romance.

This is a novella in the Treasures of Paragon series by Genevieve Jack.

I waited until after Hidden Dragon to read this. And it made a lot more sense to do that considering the whole Hera’s grimoire was brought up in the previous book.

There is two different stories here. One with Orpheus and Alena and the other featuring their children and the mating of Medea and Tavyss. Tavyss is the brother of the Evil Queen Eleanor who is the rightful heir to the throne of Paragon but didn’t want the position. I am kinda hoping he comes back and takes his rightful place so Gabriel and Raven can live on Earth and have a normal life, but that is just me.

I enjoyed the coming of age story with Medea, Circe and Isis. And the dangerous mission Orpheus and Alean went on was very familiar to me in some way. The part after they passed the River Styx and found the cabin read as if I had read it before and was just remembering the scene. Not sure why.

Overall it is a great book and a wonderful addition to the series.

If you love a good supernatural cozy culinary mystery, definitely check this one out.