The Dead of Winter (Allie Cobb Mystery #5) by J.C. Kenney 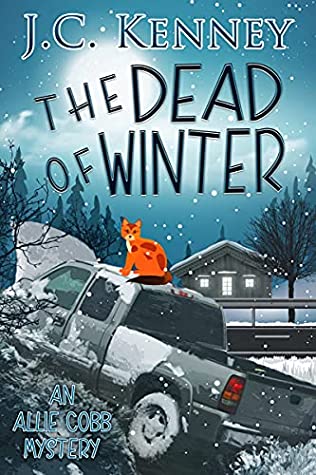 The Dead of Winter

The charming coastal town of Bar Harbor, Maine, has a fancy new When her brother calls to say he’s been in an accident and needs her help, literary agent and amateur sleuth Allie Cobb doesn’t hesitate to go to him. And though she’s worried for his safety, her concern turns to confusion when she learns that he ran his truck into a ditch to avoid hitting a large safe sitting in the middle of the road. Stranger still, when the safe is opened, police discover the grisly remains of the local gun club president.

All the evidence indicates the dead man was poisoned by lethal injection, and that the drugs could only have come from Allie’s favorite veterinarian. Determined to prove the woman’s innocence, Allie’s digging reveals that the victim’s wife may have wanted him out of the picture, and also that he was embroiled in a long-running dispute with a local businessman. With no shortage of suspects and a very ominous sense of danger lurking around her, Allie will have to watch her back, because until the killer is caught, nobody’s safe . . .

This is the fifth book in the Allie Cobb mystery series by JC Kenney.

This story has quite an interesting premise. A guy runs his car off the road after swerving to miss hitting a safe in the middle of the road. His sister comes to his aid after the accident and they discover a dead body inside the large safe. And so begins this interesting and quite compelling mystery. I enjoyed the plotting and the whodunit aspect a lot.

A local vet is discovered to have a missing bottle of the exact poison that killed the victim and Allie is prompted to investigate. She does in fact do a lot of the leg-work that I believe the police should have been doing. Not sure why they weren’t. There was an odd comment about how shorthanded the police staff was. We’ll just let the civilians find all the clues. It’s fine.

I enjoyed the character interaction the most and it prompted me to want to read other books in this series. I think I have read one other and I enjoyed that one as well. Totally worth marathoning the entire series, I think. I am definitely going to put that on my to-do list right away!

Great series to follow. Definitely going to dig into it more! So much fun to read!

If you love a cozy mystery, definitely check this one out. Great new must read book great series too!